Great news! I got rid of my cable television! Instead of paying Comcast more money for less channels than I got before the "digital" conversion, I am now paying less money for Netflix, Hulu Plus, a digital antenna and an internet connection! Life is complet- oh, shit. I forgot about Adult Swim! EGADS! Ah, well. Just a light update about a little bit of me. Now, if only H. John Benjamin were in more things... Bob's Burgers marathon, it is.

The Vodka's coming along nicely... they're all taking some serious colors. I figure once I filter and strain the vodka, they'll all return to a fairly clear color. Who knows? The chocolate one looks disgusting... like a jar of diarrhea. Am I keeping jars of diarrhea in my basement? Don't tell my land lord.
Posted by Thomas at 12:50 PM No comments: 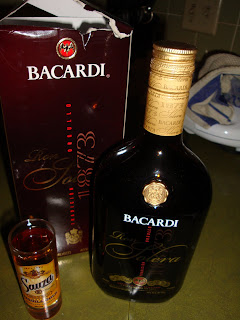 I got off of work a couple of hours ago. It wasn't a long day timewise, but I felt beat by what I had dealt with and it felt like the hours just dragged on. After dealing with minimal sales and awkward customers taking a lot of time, I could only pride myself on the fact that I took care of each of them in the best way that I could. But, because my numbers were lacking, badly, I really longed to get drunk after work tonight. Luckily a bunch of time with my lady friend, Blair, helped clear up some of those morose feelings and the news that Toki (the he/she rabbit)* is no longer as sick as she used to be. But, as anyone who knows me and any regular reader of this blog can tell you, I enjoy a drink or two on the occasion of... well, any time I can. Unfortunately I've got a meeting at 7:30 in th 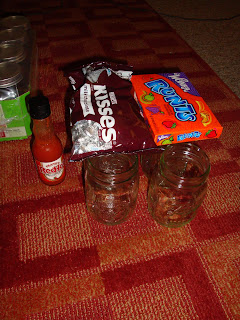 e morning. So, I can't really down a 5th of Admiral Nelson and sleep it off all day tomorrow in a stupor of melancholy. So, I settled for something like this: Ron Solera from Bicardi (picture). I did a couple of shots and then embarked on an interesting experiment: Vodka Infusion.

The Bacardi Ron Solera is, honestly, one of the best rums I have tasted in ages. Its bright flavor is sweet and the follow isn't too difficult, though a bit sharp, its overall feel was smooth. Mixing it into soda takes away much of its complexity and makes it taste like Bacardi Anejo or simply Bacardi Dark. But, it's a good rum. Highly recommended.

In anycase, I bought some mason jars, some 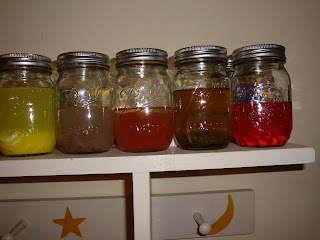 Hershey's Kisses and some Runts. I'm making some flavor infused vodkas. The flavors I'm make are thus: Banana Runt, Grape Runt, Strawberry Runt, Honey Herb Green Tea, Chocolate and Frank's Redhot. I'm canning them and letting them sit in the basement for a week. I'll shake them everyday and then, come Friday, I'll filter them and then label and store them in mason jars. Epic fun!
*PS, funny news: the baby-girl Toki Wartooth, well, it turns out that she has testicles. A few days ago Blair and I noticed some odd skin between her legs, and well... yesterday, she finally 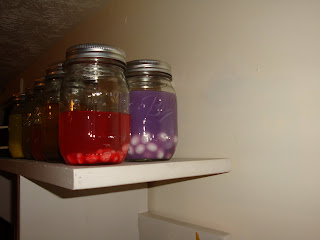 cooperated (in her sick lethargy) enough to let me pick her up and flip her... well, guess what! She has balls! She is a he, but I'm so used to calling her "her" and she will continue to be a girl... poor Toki.
Posted by Thomas at 5:02 PM No comments: 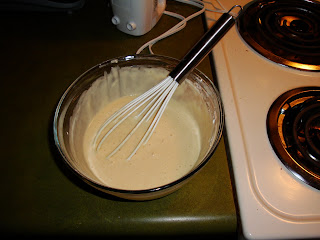 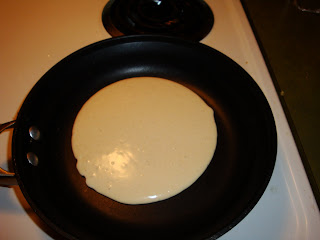 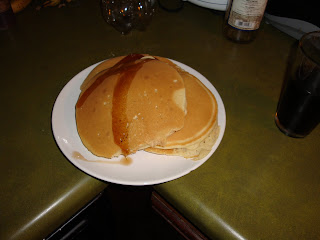 So, I made pancakes... not just pancakes, but... pancakes made using a Belgian Waffle recipe. So, I made Belgian Waffle batter and decided "nah, fuck it" and added some vanilla extract and cinnamon and nutmeg. And then cooked it like pancakes. It made three HUGE fluffy, cake-y pancakes full of delicious! Blair seemed to enjoy them.
Posted by Thomas at 4:58 PM No comments: 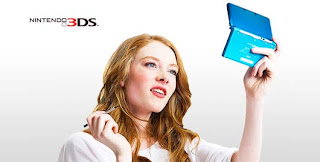 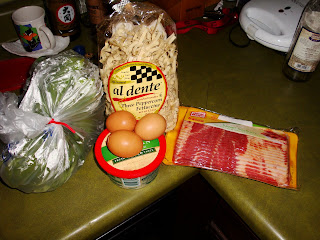 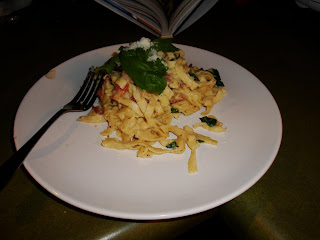 So, I'm in love with this woman, Claire Robinson. As well as the redhead on the 3DS ads (pictured left). I like to cook out of Claire's book because of how simple the recipes are. I made the Carbonara out of her book. I'm doing the last few weeks of updates in one sitting and life's kind of really shitting on me right now, so I'm not interested in continuing typing much. So, here's the self explanatory pictures.
Posted by Thomas at 8:59 AM No comments: 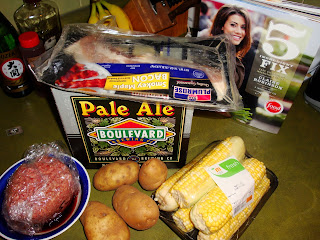 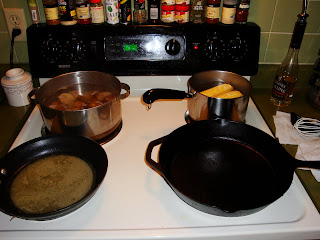 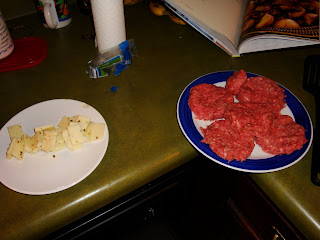 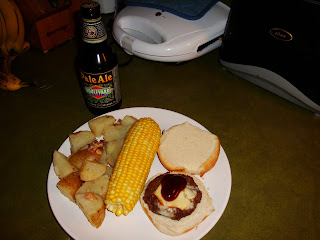 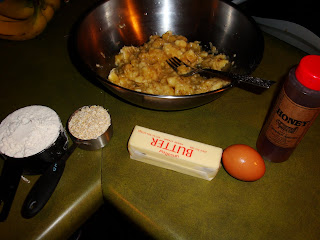 So, my work has me working all hours of the day all days of the week (usually have a 6 day week), so Burger Fridays is a bit hit and miss. I did this on a saturday. It's A burger with pepper jack and smoked guyere, light spices and then corn on le cob and german hot potato salad. The potato salad recipe came from Claire Robinson's Five Ingredient Fix. I then made muffins out of the same book for breakfast the next morning. It uses honey, instead of sugar. I substituted 1/3cup of the flour with oat, to give it texture. They didn't rise as much, but they were delicious. Unfortunately, I have no pictures of the muffins done. In that last pic, those are bananas in the bowl, smashed up. In anycase: pictorial time!
Posted by Thomas at 8:51 AM No comments: 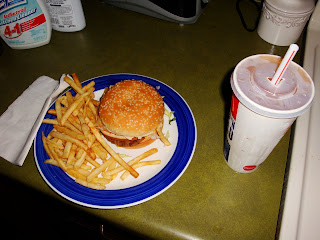 I've been working ALOT. And between work and my house, there is a McDonalds. I like McDonalds. So, I eat it from time to time. The first week of my new job, I ate it 4 out of 5 days (not including breakfast, which makes it twice in one day). This was taken on the second week, I started getting Sushi that week, but one day, on the way home, I picked this up. Mixed some rum in with the sprite and had a good night. This week, I've had it once for breakfast when I had a meeting at 7am. Sausage Biscuit, bitches. God bless the Mac.
Posted by Thomas at 8:48 AM No comments:

So, I love sloppy joes, but I'm not in the mood to write a few write-up on them. It's pretty self explanatory from the pictures. I added some Dave's Ghost Pepper to it, cause I like the flavor, so it was yummy and spicy. I added the Ghost Pepper to try and keep my Girlfriend, most likely soon to be simply roommate, from eating all the leftovers. That didn't stop her. Here's the pictorial. PS: I made some poppers with it. A very pepper dinner. 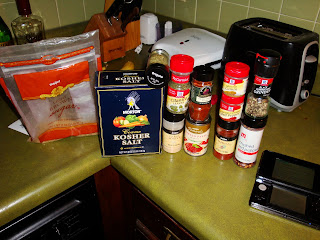 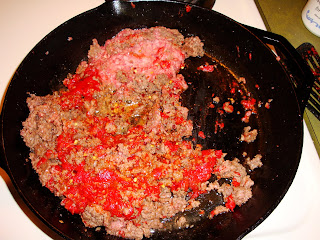 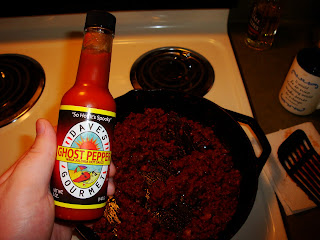 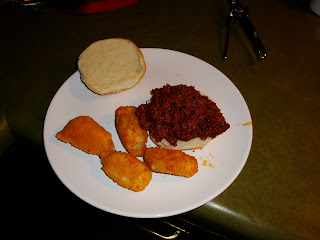 Posted by Thomas at 8:43 AM No comments:

Here's some chicken alfredo I made. It turned out yellow, which I think is cause of the bacon. I'd type more, but I'm too pissed off/depressed/hungover/upset with a few situations in my life. So, here are the pictures. 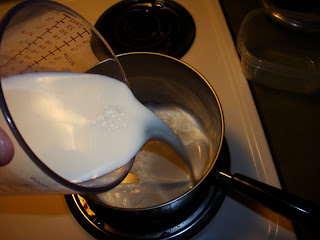 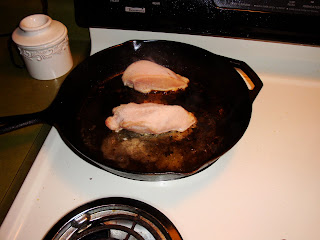 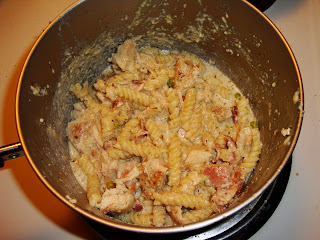 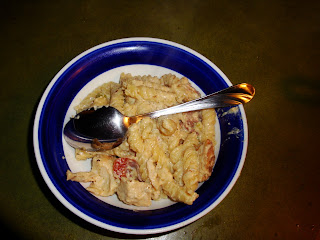 Posted by Thomas at 8:37 AM No comments:

Sorry for being so dead

between the new job and lack of money, it's been very hard to make food and blog posts. I got a couple coming up, including some Sloppy Joes and some Alfredo Pasta. So, just give me TIME!!!!!

See you all soon.
Posted by Thomas at 6:32 PM No comments: