So, I'm doing this update from a phone.  It won't be the most eloquent post and will have some spelling errorals.  The first meal is a very traditional German dinner that I made with a good friend of mine.  While he made Chicken Schnitzel with a mushroom and red wine sauce, I made speatzal to go along with it.  There were also spiced potatoes.  The end result was a very traditional German dinner.  Schnitzel is essentially tenderized, breaded and pan fried meat, similar to Chicken Fried Steak.  Chicken Fried Steak was derived from Schnitzel and is popular in areas with a large German immigrant population.  Speatzel is a German pasta dish made similar to Italian Gnocchi and sauteed in butter.  Cooking with Tim was amazing and I look forward to meeting up with him again to cook some delicious food.  It was a great dinner shared with people I love.

The next day I cooked dinner for my parents.  My mother is excited that I'll be moving back in with them.  Living with Blair isn't working anymore. Alternating not sleeping with crying or drinking myself to sleep doesn't work.

On the way to my parents house I came up with a.good dinner. Margarita chicken with beer battered asparagus and potatoes.  The chicken was marinated in tequilla, triple sec, lime juice, cilantro and garlic.  The beer batter was made using Rogue Dead Guy Ale and the usual spices.  My parents loved it.  The potatoes were just cooked in chicken broth.  My dad didn't like the potatoes.  Well, he liked them, but barely ate them, due to the fact that growing up in a German/Irish household: boiled potatoes were a nightly staple.  He's eaten normal old potatoes so much growing up, he can't do it anymore.

So, soon I'll be cooking two or three nights a week for my family, work permitting.  I'm looking forward to seeing my family more often and being able to be there when my nephew is born.  And I'll switch back to using the T3 for pictures when I can.  Sorry about all the spelling errors. 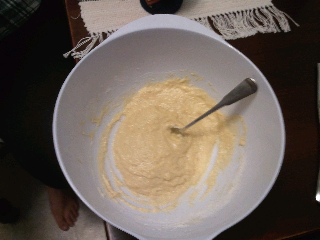 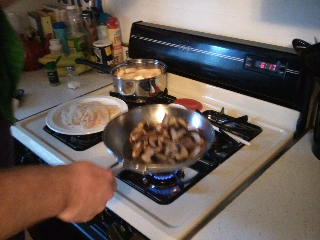 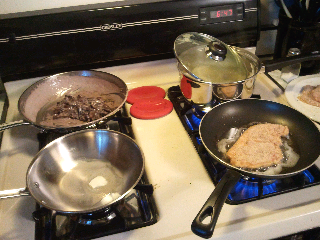 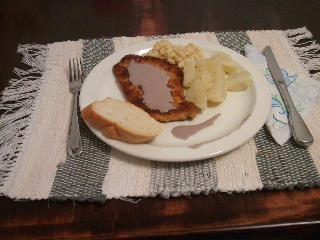 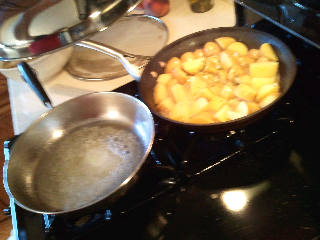 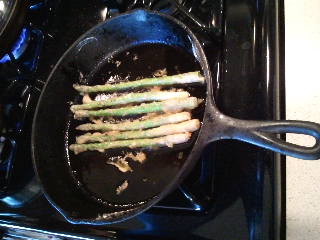 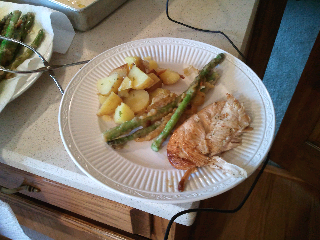 Posted by Thomas at 9:08 PM No comments:

I'm posting via phone again. I know: no cooking today.

I have a couple of nights of cooking to put up.  I'll post them when I can, but soon I'll be living for my parents' and I'll be cooking a lot more. Sorry, readers for being so distant.  Now I wish I had white wine to watch this episode of 30 Rock.  I'm thinking that when I move in with my parents I can read modernist literature with a bottle of wine on the deck again.  Here I come James Joyce. 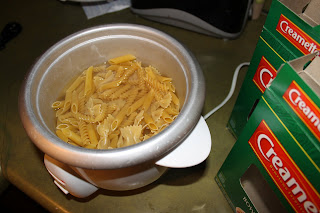 Just as Americans began to mourn their favorite culinary personality, the Pantless Chef, he makes a comeback post of... epic... proportions... wait, did I just make Mac'n'Cheese? I guess I did. It's not so much... macaroni and cheese as it is: mix of every dry pasta I have left and cheese. It was pretty delicious.

I cooked it in a rice cooker, which'll probably leave a horrible mess to clean up, but I'm getting drunk. I don't work tomorrow... so drinking: yay. A little bit of bourbon, mac'n'cheese and Muddy Waters. So fun. So, I'll forget about the mess until I wake up hungover tomorrow, so I'm cool.

I cooked some pasta in the rice cooker, then put a ton of cheese, butter and milk in. 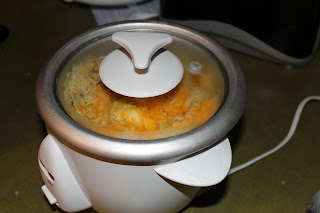 Mixed it and then added some hot sauce. It was delicious, creamy and kick ass. I'd love to give you some REALLY good looking shots of the mac'n'cheese, but... I got bourbon, and that don't concern me right now.

I'm gonna try to keep this blog up, but... I don't know for how long. With cooking being such a communal endeavor, I can't see how I can keep this up too long without a communal feel. I made three servings of mac'n'cheese for myself. I had to throw away a ton of rice, today, too. Cause I made enough for multiple people, and multiple people aren't eating my food anymore. I'm hoping I can get some kitchen time with a friend of mine tomorrow, but she's insisting on cooking FOR me. But, I really want to cook for someone, again. I've gotten better with sharing kitchens, too. But, I hate cooking for myself, I'd much rather eat $1 frozen dinners if I'm 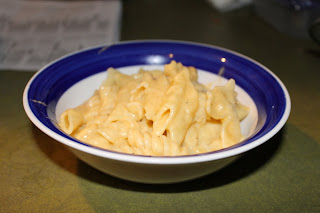 going to be alone and then spend $20 a night on bourbon. But, you know, I've been told I have to learn to love myself before I can truly love another. I don't know what to say to that, most of the time.

I'm rambling like a buzzed guy at the bar who hasn't talked to anyone in a while. Enjoy your night, kids. I'll be back up with another post, soon, I hope.
Posted by Thomas at 8:29 PM No comments:

It ain't the last

I don't know quite what to say... but... making a last post seems bitter sweet right now. Maybe cooking is too much for me. I may just give all my shit up for nothing... who knows? I don't want to make a last post, but... frozen meals and shit make me feel bad... long story.... adios.... 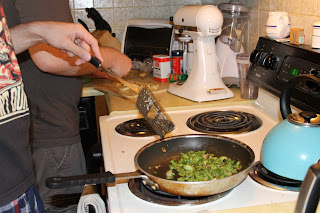 Oh, crazy days. So crazy. Visited the zoo and saw a cute little baby rabbit. After the zoo, the local farmers market was visited, where I spent $8 on peppers, potatoes, okra, hot peppers and banana peppers. So much fresh produce, so cheap. After hitting the market, I hit up my neighbor and we cooked a meal for a mutual friend. 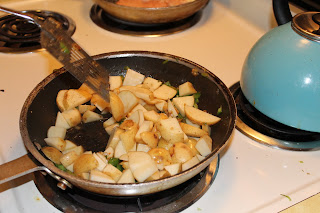 He was concerned that my plan wasn't real, I just wanted to start cooking. Never cooked okra before, so I cooked it up in a way that I consider to be cheating: fried! Definitely made potato hash, in which all of the ingredients were introduced to the pan in the wrong order. Luckily, my neighbor had a little technique to recover. And the potatoes came out perfect. And then he sauteed some chicken, which was the best chicken I've ever had. 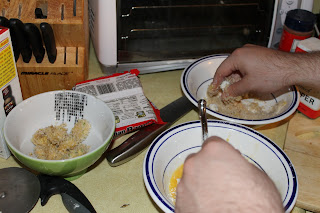 Wow, this post is really short, succinct and to the point... today, I'm just not interested in dragging shit out too much. The simple answer is the one that I want. I never had okra before, and I was actually surprised that I liked it. It was a very complex vegetable. The peppers acquired at the market were all rather bitter, except the banana peppers. It was interesting. 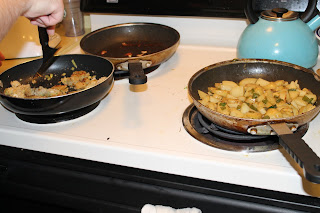 The hash, which consisted of potatoes and peppers, was very fresh tasting and perfectly seasoned, thanks to my friend's experience in professional kitchens. Although, I have to think that my frying onions and garlic till they perfumed really helped the hash take on a delicious flavor. The whole meal was made using very few spices. I think the entire night, all we had was butter, salt, pepper, chili powder and garlic. It was interesting to step away from my spices for a change. 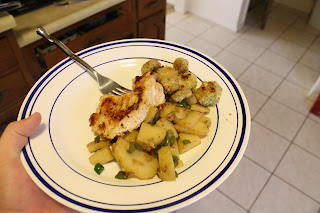 Cooking this meal really brought to mind Micheal Ruhlman's book, The Making of a Chef. In the book he describes the concept of "cooking in service of the potato." The meal tonight really brought this to mind due to it's simplicity and beauty. The chicken was salted, peppered and sauteed in butter, but was one of the best pieces of chicken I've ever had. So, in anycase, here's a baby bunny. 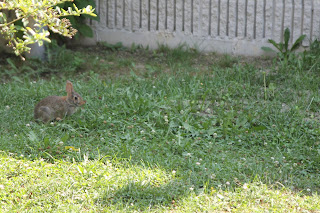 Posted by Thomas at 8:49 AM No comments: 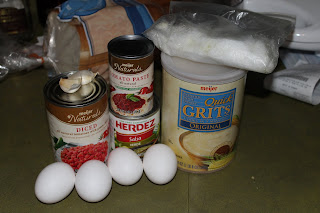 So, I got this recipe from Beth over at Budget Byes, a fantastic blog full of amazing recipes. Though mine didn't turn out looking anywhere near as good as hers, it was still a good meal. I started by frying some garlic and onions in olive oil in one my pans. After the onions achieved transparency and the garlic became perfumey I added diced tomatoes, salsa verde, 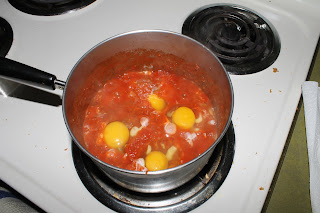 which I used in place of her canned chilies, and tomato paste and brought it to a boil.

Obviously, the next step was to start the grits and then poach the eggs. It took a total of 40 minutes for me to cook. Bri, the friend whom I was cooking for, enjoyed it. It unfortunately looked pretty poor, but tasted fantastic. I felt like the eggs were overcooked, but she liked them just fine. I ended up with 2 extra servings, which I'm offering to my roommate for breakfast and I'll probably finish the last one tomorrow for 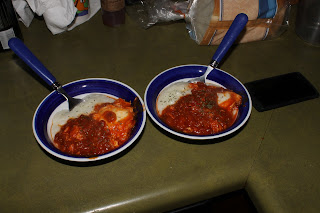 lunch. It was an inexpensive way to make an "elegant" meal, but it made entirely too much food. Another aspect that I absolutely loved was the fusion of southern cuisine, mexican cuisine and french cuisine. A sort of melt of Louisiana and the southwest. I loved it. But, god... I wish I was better at food photography. I gotta work on that.

Thanks to Beth and Budget Bytes!
Posted by Thomas at 10:42 PM No comments: 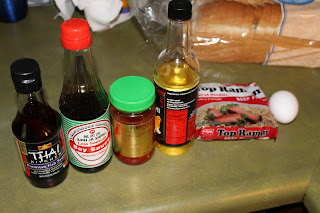 So, I have no money. I have, literally, no money right now. I'm waiting for my next paycheck and going insane. So, I decided to spice up some ramen noodles again. This time, I went a little easy on it compared to my last outing with ramen.

This time I mixed an egg, some soy sauce, basic spices, fish sauce and chili paste to make a sauce. After mixing the sauce, I realized that it was a little bland and needed some different flavors to it, so I tossed in some peanut 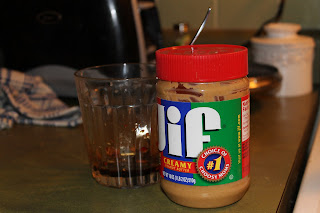 butter. To add, you know, sweetness and peanut flavor.

The meal needed some vegetables, so I mixed in some of my frozen veggies and then fried the cooked ramen noodles in the sauce. The smell was enticing. It had a lot of dimension to it, without having a lot of actual dimension. The sauce was nice and thick with the peanut butter and actually coated the noodles. Rather than pan frying the noodles with oil, they came out coated in a silky 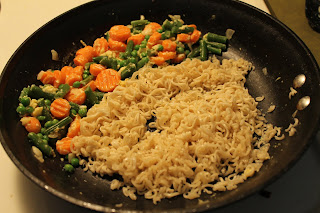 sauce similar to a carbonara. It was not greasy at all. the best part: a 15 cent pack of ramen, some frozen veggies and various sauces and spices turned into a meal to feed three people. It impressed greatly upon the people I cooked for. Especially since it wasn't out of a cookbook or off of a recipe. It was a completely winged attempt at making dinner. And it worked and it impressed. I guess it places me one step further on the right side of things. 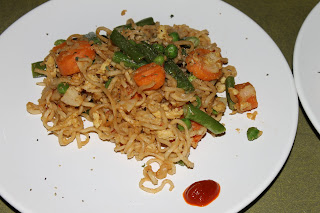