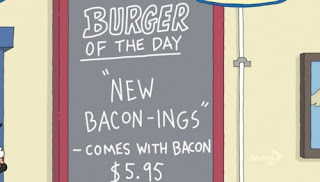 Well, I missed Burger Friday this week due to working. And I will, again, this week. So, what did I do? I made "The Gypsy" from The Cheese and Burger Society. I also rolled my "Bob's Burger" theme into this one. I made the "New Bacon-ings" from the pilot episode of the show. "Served with Bacon." I took some liberties with it by making it a much fancier burger than Bob would have served. The Gypsy is a very interesting burger. It mixes a lot of different flavors together, some of which you'd never think would come together well. 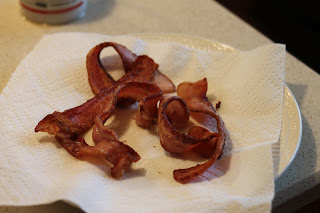 The burger is topped with fresh mozzarella and parmigiana cheese. I got the real stuff, not the "shaky" cheese as Paula Small would put it (+5 internets for referencing two Loren Bouchard TV series in one post!). The mozzarella and parmigiana sat atop two strips of thick cut peppered bacon (I believe Hormel brand, I can't quite remember) on top of a 1/3 lbs patty. This construct sat on thinly sliced red onions, tomatoes and cucumbers. The bun was an "Onion Kaiser" bun with ranch dressing. The one gripe I have is that the crunch of the cucumbers mixed with the crunch of the bacon made each bite feel a little odd. Two distinct crunches, one top, one bottom. 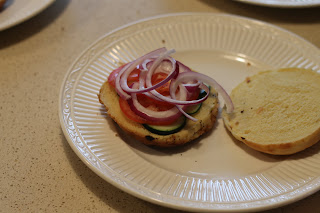 Now, I'd never think that Ranch and cucumbers would go well with bacon, beef and Italian cheeses, but I was wrong. The brightness of the cucumbers and Ranch dressing sort of "framed" the other flavors of the burger. I was very impressed with the suggestions of the Cheese and Burger Society.

I really liked it! 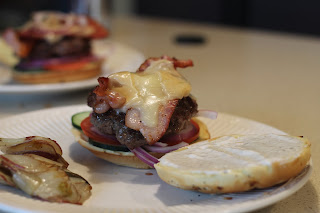