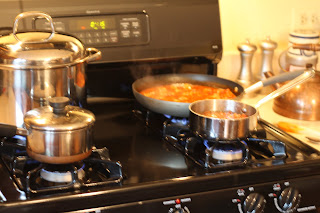 Well, I skipped last weeks post about the Big Ben. Sorry about that. I only had cell phone pics and felt that a post about another Cheese and Burger Society burger would be a bit... droll, considering that I've been doing nothing but posting about burgers, as of late.

So, here we are... Friday night. Fridays are what day? Burger day! Not tonight, it's Mexican Wednesday on a Friday! 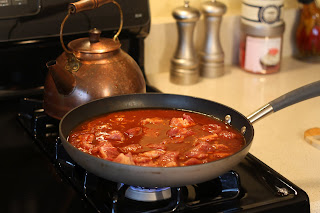 I made Rick Bayless' Red Chili Pork Tamales. I made a huge mess of the kitchen making this. Coating the Cuisenart in red pepper, filling the mixer with batter and coating the sink in pork grease. I loved the idea behind how to cook the pork. I'm not a huge pork fan, myself. I don't like ham or pork-chops, just bacon and ribs. So, braising the pork in a pepper puree made the pork shoulder extremely succulent, delicate and flavorful. I absolutely loved the pork.
While making it, as per Bayless' recipe, I found that the sauce was all too hot for human consumption... at least human consumption outside of myself, considering I prefer the burn of hell in my food. I 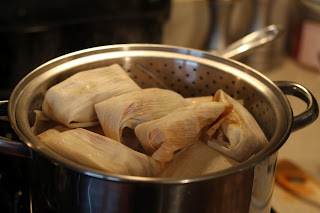 In his show, Bayless often depicts himself using threads torn off of the corn husks to tie his tamales together while they steam. I tried this and found that the strands were far to short to successfully tie the tamales down. Given that my mother does not own kitchen twine (who does anymore?!) and that the strands were too short, I used gravity as my friend. The folded ends were held down by the weight of the tamale. 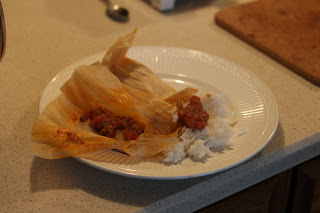 I absolutely loved this recipe, actually. I highly endorse this recipe. I did... though... cook it using corn husks rather than banana leaves, which worries me... will Lanie Bayless want to be with a guy who uses corn husks instead of banana leaves?
Posted by Thomas at 10:07 PM